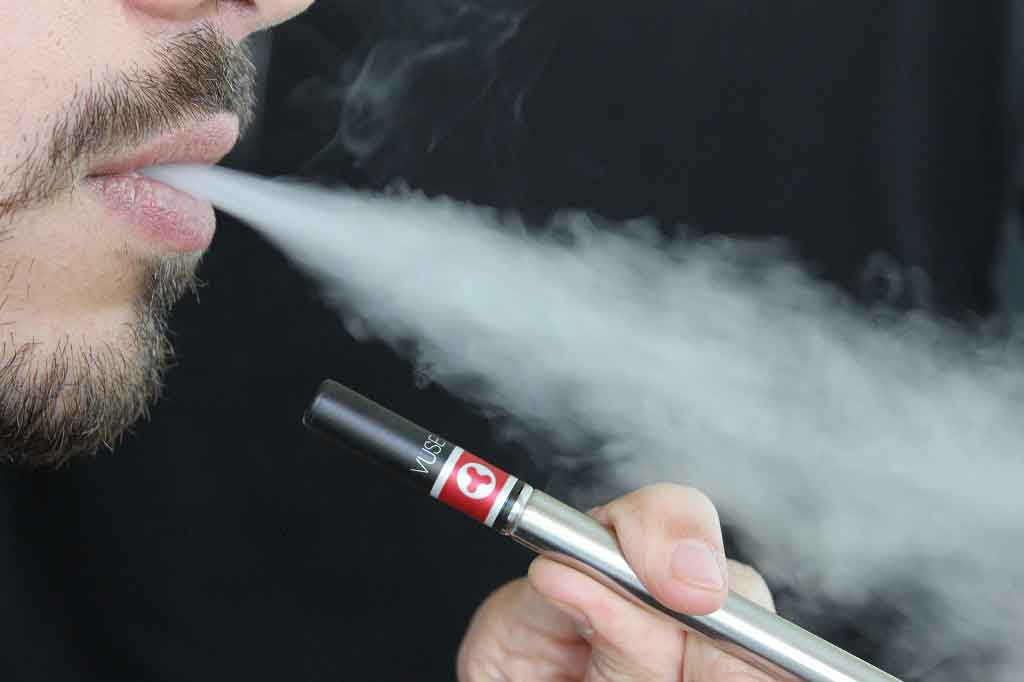 E-cigarettes deliver a vaporised dose of nicotine, the addictive substance in tobacco. They don't involve burning tobacco, which causes much of the health damage from smoking cigarettes. However, there's been controversy about the safety of e-cigarettes and a lack of research about how effective they are in helping people to stop smoking.

Researchers carried out a trial with 886 smokers who sought help through NHS stop smoking services. People were randomly assigned to either nicotine replacement therapy (NRT) products (products such as patches or gums that can deliver a dose of nicotine) or e-cigarettes, plus one-to-one support for at least 4 weeks. After a year, 18% of e-cigarette users had stopped smoking tobacco, compared to 9.9% of NRT users.

Of those e-cigarette users who had stopped smoking after 1 year, 80% were still vaping regularly. Questions about the long-term safety of e-cigarettes are still unanswered, however they are likely to be much less harmful than long-term tobacco smoking.

If you smoke, making the decision to stop is probably the best thing you can do for your health, whatever type of quitting aid that you try. Find out more about NHS stop smoking services.

The study was carried out by a team from Queen Mary University of London, Kings College London, London South Bank University, the University of York, Leicester City Council – all in the UK – and Roswel Park Comprehensive Cancer Center in the US. It was funded by the (UK) National Institute of Health Research and Cancer Research UK, and published in the peer-reviewed New England Journal of Medicine.

The study was widely reported in the UK media, with most reports offering balanced and accurate accounts.

This was a randomised controlled trial (RCT), which is usually the best way to compare 2 treatments to see which works best.

Researchers recruited people who sought help to stop smoking through NHS services. The trial included only adult smokers who were not pregnant or breastfeeding, had no strong preference as to whether they used NRT or e-cigarettes, and were not currently using either product (although some had used them in the past).

People were assigned randomly to either the NRT products of their choice, or e-cigarettes, on their quit date. Everyone was offered weekly support with local clinicians who also monitored carbon monoxide levels in their breath (a measure of smoking) for the first 4 weeks of the trial.

People assigned NRT were encouraged to use combinations of short-acting and long-acting products and were provided with supplies of their chosen products for 3 months. People assigned e-cigarettes were given a starter pack of a refillable e-cigarette kit with 1 bottle of e-liquid (liquid nicotine) and asked to buy refill liquid packs themselves.

Researchers collected information about participants' use of assigned products, use of tobacco, rating of products, withdrawal symptoms, adverse reactions to products, and respiratory symptoms (such as coughing), throughout the trial. People who said they had stopped smoking after 1 year were asked to attend for a carbon monoxide screen to confirm their claim.

The main outcome of interest was sustained non-smoking after 1 year after quit date, based on self-report of having smoked no more than 5 cigarettes from 2 weeks after the quit date, backed up by carbon monoxide results.

People who did not respond to follow-up calls or attend for carbon monoxide tests were classed as still smoking.

Of the people who'd been assigned a treatment, 78.8% completed the 1 year follow-up:

People assigned to e-cigarettes reported less severe urges to smoke in the first 4 weeks of the study.

They addressed the possible long-term safety issues, saying that people's continued use of e-cigarettes "can be seen as problematic if e-cigarette use for a year signals ongoing long-term use, which may pose as-yet-unknown health risks". However, they say, ongoing use of e-cigarettes may prevent relapse into smoking and reduce withdrawal symptoms.

This important study provides the first concrete evidence that, among people wanting to give up smoking, e-cigarettes may be a more effective treatment than NRT products, when both are combined with clinical support.

The study was welcomed by Public Health England, whose tobacco control lead said that stop smoking services should welcome people who want to stop smoking with the help of e-cigarettes. However, the study has a few limitations.

Because of the nature of the treatments, it wasn't possible to disguise from people whether they were using e-cigarettes or NRT products. This might have led to some bias if people using NRT products expected them to work less well than e-cigarettes, because these people might have put less effort into attempting to quit.

The study included only people who referred themselves to NHS stop smoking services, who were all given one-to-one support. That means we don't know how well e-cigarettes work for people trying to quit using e-cigarettes without additional support.

The study found no evidence of harm from e-cigarettes during the 1 year period. We don't know whether the chemicals in e-cigarettes, particularly the flavourings, may have long-term harms that have not yet come to light. A previous review estimated that e-cigarettes are much less harmful than smoking tobacco, by about 95%.

The debate on the most effective and safe way to quit smoking is likely to continue.

There is no credible argument that can challenge the statement that quitting smoking is the best thing you can do for your health if you currently smoke.

Find out more about ways to stop smoking.