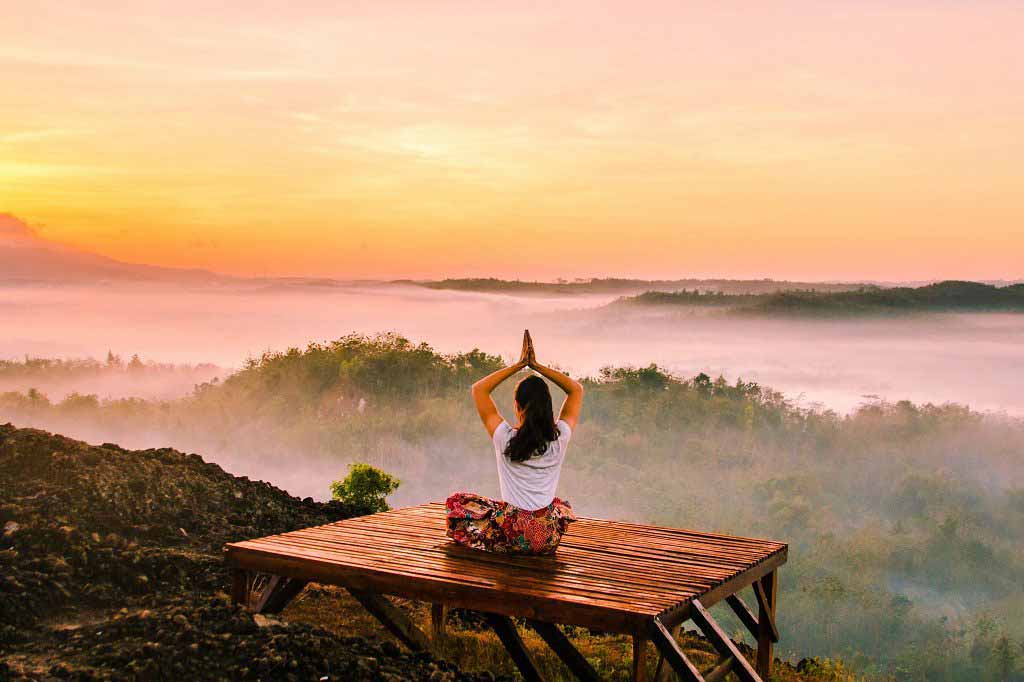 This follows a review of studies that looked at the effect of mindfulness-based interventions on weight loss and obesity-related eating behaviours.

Mindfulness draws on the ancient practice of mediation by training people to become more aware of the present moment while not getting caught up with any thoughts or worries at the back of the mind.

The researchers argued that mindfulness could have a number of potential benefits. It may reduce negative thoughts and feelings that can encourage over-eating, and it may also improve resilience to help deal with the hunger pangs and increased physical activity that come when following a diet and exercise plan.

Overall, they found mindfulness interventions were associated with small-to-moderate effects on weight loss, with an average loss of about 7lb (3.18kg) at follow-up.

In comparison, while there was higher initial average weight loss in control groups – where people were given more conventional weight loss treatment, such as a diet and exercise plan – this was followed by weight gain in many people, reducing the overall effect. Follow-up time differed between studies but was 16.25 weeks on average.

There were also some improvements in eating behaviours in the mindfulness groups, such as a reduction in binge eating.

The study was carried out by researchers from McGill University in Canada, Harvard University in the US and the University of Groningen in the Netherlands, and did not report any sources of funding. It was published in the peer-reviewed medical journal Obesity Reviews.

The Mail Online's headline claimed that mindfulness is "the psychological technique that will help you keep the pounds off for good", but there was no evidence for this. As the researchers put it: "More research is needed to examine mindfulness-based interventions' efficacy for weight loss maintenance."

This was a systematic review and meta-analysis of previously published studies that looked at mindfulness training as a strategy for weight loss or modifying eating patterns.

The rising rate of obesity is a global public health concern and there's a need for effective interventions to tackle it. The researchers suggested that obesity and being overweight, and the related eating patterns, involve psychological elements. For example, past research suggests that comfort eating in response to stress and emotion, or not knowing when you're full, might be possible causes.

The findings from studies on the effectiveness of psychological approaches to assist weight loss have been mixed, so the researchers aimed to gather together the evidence and analyse it. A systematic review is a good way to assess the overall state of research into a topic, but the findings are only as reliable as the studies that go into them.

The researchers searched literature databases for any studies that looked at mindfulness as a weight loss intervention. They gathered relevant information on the studies' design, including populations, characteristics of the intervention and the outcomes assessed.

They found a total of 19 studies across 18 publications. These included a total of 1,160 participants receiving a mindfulness-based intervention or a control group who received no intervention – 4 studies were non-randomised "before-and-after" studies, and the rest were randomised controlled trials. The majority (71.7%) of the participants were young adult females.

The researchers looked at the effect of mindfulness training on 4 outcomes:

They pooled the results where possible and summarised them as effect sizes. Effect sizes are a way of calculating how much the intervention group differs from the control group in terms of the assessed outcome. They can be measured using a scoring system called "Hedges' g", with 0.5 considered a medium effect size and 0.8 a large effect size.

The average weight loss in the control group differed depending on the intervention used – for example, diet, exercise or lifestyle advice. Most people initially lost more weight than those in the mindfulness group, but many had regained some weight at the longer follow-up, reducing the overall average loss.

Mindfulness training was found to:

Studies using combinations of formal (setting aside part of every day to meditate) and informal (using mindfulness techniques during daily activities) meditation practices tended to be more effective than just formal practice for both weight loss and improving eating behaviours.

However, while the positive effect of mindfulness on weight loss seemed to be have been maintained at longer follow-up, this wasn't the case for the effect on eating behaviours.

The researchers said their results "suggest that mindfulness-based interventions are effective for reducing weight and improving obesity-related eating behaviours among individuals who were overweight and obese".

However, they acknowledged the limitations of the study, concluding: "Further research is needed to examine their efficacy for weight loss maintenance."

This study showed that mindfulness-based interventions may be beneficial for weight loss and improving obesity-related eating behaviours. It highlights the potential of using mindfulness training to support and maintain weight loss. However, there are important limitations to bear in mind.

While most studies were randomised controlled trials, meaning they should have been adequate to assess the effects of an intervention, the sample sizes were small. The studies also differed in their methods, populations, intervention characteristics, measured outcomes and overall quality. This means it's very difficult to draw an accurate conclusion of the effect when combining the results of these studies.

The researchers reported that less than half of the studies used a validated measure of mindfulness. The difference in the interventions is a particular problem because it means it's not possible to say for sure that a particular type of training is the most effective, or to know whether the results were truly down to mindfulness training or were instead the result of other confounders.

It's also difficult to know if the participants were following other weight loss or weight gain regimes in addition to mindfulness training, which may have influenced both their engagement with the intervention and the results of the studies. In any case, there wasn't a clear comparison with standard approaches for weight loss, which centre on diet and exercise, so it can't be said that mindfulness is more effective.

Finally, as most participants were women, the results may not be applicable to other groups. And in a similar vein, it wasn't reported which countries the pooled studies took place in, so the interventions and population characteristics may not be generalisable to the UK.

While we can't say for sure that mindfulness aids weight loss, we know that eating a balanced diet and exercising regularly do.

For those who are concerned about their weight and wish to seek appropriate guidance, speak to your GP and read our weight loss advice.